In a shocking turn of events, it seems that the British people are backing Theresa May and her Brexit deal – but should this come across as so shocking? 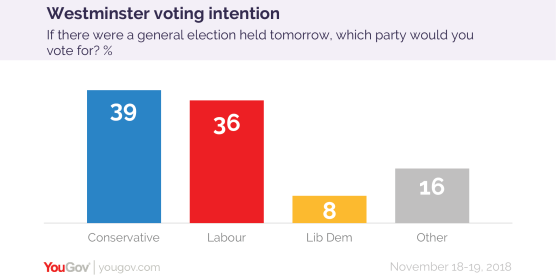 The same poll states that people also back May over Corbyn. 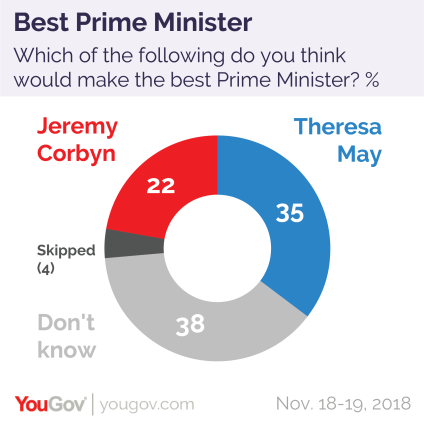 Theresa May’s Brexit deal is indicating that we will indeed have a continued economic relationship with the European Union, including some arrangements to remain in large parts of the Single Market AND the Customs Union – this was blasted by hard-brexiteer Boris Johnson who said that “it’s vassal state stuff”– but isn’t this what the people wanted? Do people really want a hard brexit proposed by the likes of Boris Johnson, Jacob Rees-Mogg, or Aaron Banks?

Also, when it comes back to “taking back control” – this agreement means, according to the Prime Minister herself, that migration would become skills-based, with Europeans no longer prioritised over “engineers from Sydney or software developers from Delhi”. Immigration was one of the major reasons why Britons voted to leave the European Union, so if this deal will cement controlled immigration, this will possibly lead to voters being satisfied with the Brexit deal.

Labour needs to step up it’s game, as a promise of a better deal to protect things such as worker’s right and keep environmental safeguards doesn’t seem to be attracting voters. Would a second referendum attract more support than their current position? Will Theresa May’s deal go ahead, or will her party revolt and topple her? All is still to be revealed…

I run and pay for this website all by myself (it isn’t free!) with no help, so any financial support would be appreciated. Click here: gofundme.com/franglishpolitics

View all posts by thelondonelite

This is a text widget, which allows you to add text or HTML to your sidebar. You can use them to display text, links, images, HTML, or a combination of these. Edit them in the Widget section of the Customizer.
Loading Comments...
Comment
×
%d bloggers like this: